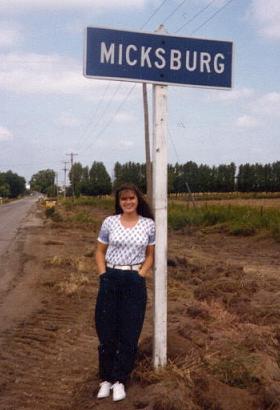 The winter before JOHN and ANNE went to Canada, l846/7, was the worst in living memory in Ireland and at the height of the GREAT FAMINE. In the preceding years emigration had been in the region of 200,000 but in l85l it peaked at a quarter of a million souls.

The women of Micksburg spun cloth and made clothes for their families and it was not until l948 – nearly a century after the Micks arrival there, that Electricity came to Micksburg and made life easier – by then 4 or 5 generations of Micks had lived there. The pine log house which John had built was then still standing.

In a big fire in l88l the village was threatened but saved by a change in the wind.

It is interesting to note how many of these Irish Palatine emigrants married twice. Palatine women were noted for working beside their husbands from the time they came to Ireland, but as pioneers in Canada life must have been much harder.

Travel was by foot, horse or wagon – and even Oxen were used. Women had to be nurse and doctor in illness and emergency and there were no telephones.

Built in l879, the first Service was held two weeks after the commencement of the building – a Methodist Church, it became the United Church of Canada in l925.

The land on which the Church stood was purchased from GEORGE MICK on l6-5-l879, and the Trustees were Adam Miller senior, George Mick junior, Peter Mick junior and John Mick junior., all descendants of the original pioneers, two of whom, Daniel, and Henry became clergymen.
The Pulpit was hand carved by Frederick Townsend and the first child baptised in the Church was William Townsend. The Pulpit was brought to the Church on a “jumper” similar to a wooden sleigh with curved runners. George Black plastered the Church and put on the first coat on the ceiling and walls, with the exception of about 8 ft. in one day – the men who were mixing and carrying the plaster refused to work longer hours! The Church was log built and after l936 it was clapboarded. Details of the gifts donated to the Church – not necessarily at the time of building – are as follows and it will be noted that names of the individual Donors are related and intermarried with the MICK/s family.

Note: The newspaper report from which I have taken this information was written by the Staff Correspondent of a newspaper which is not named.

After ll6 years of Faithful Ministry, l879 to l995, the old Micksburg United Church was moved to The Champlain Trail Museum in Pembroke. and lovingly restored. From May until October Services were held each Thursday evening – taken by a local clergyman (all denominations) and a local Organist played . A visiting Choir or soloist participated. The Re-dedication Service was held on Sunday May 3lst l998 at 4 p.m. by the Rev. Murray McGlashen.- using scripture readings that could have been used at the original site in l879 – and in the presence of many Mick descendants.

PETER was the Founder of the Canadian and American MICK/s family. He was born in Ireland in November l780 and married ELIZABETH SHOEMAKER (SCHUMACHER in German) on 29-l2-l807... read more